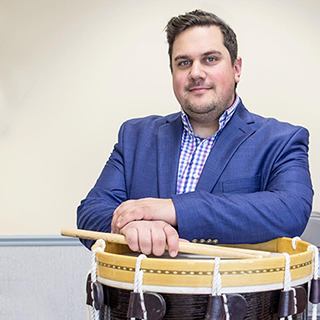 Brendan Mason is an active teacher, performer, and clinician in the New England area. He currently teaches general and instrumental music at East Shoreline Catholic Academy in Branford, CT (previously Saint Mary School). He serves as the Assistant Marching Band Director for Jonathan Law High School in Milford, CT. He provides private lessons to many students of all ages in the New England area.

Brendan has also served as a technician to several area drum lines and percussion sections, including the Cheshire High School Marching Band, Col. John Chester Drum Corps, Connecticut Patriots Drum Corps, The Stony Creek Drum Corps, and the 7th Regiment Drum and Bugle Corps. He has provided clinics and workshops worldwide, including a 2014 presentation for the Percussive Arts Society International Convention in Indianapolis, a week of clinics in Singapore for the Singapore Armed Forces Band, and for The Royal Marine School of Music in Portsmouth, UK. Brendan is a regular teacher, performer, and guest throughout China as a member of The China Percussive Arts Society.

Brendan is a student of Paul Cormier, Mike Gagnon, Matt Mayotte, and Tim Cecil. He later studied under Ken Green while attending Northwestern State University of Louisiana, where he pursued a degree in music education and percussion performance. Brendan started playing rudimental snare drum at the age of 6 as a Col. John Chester Drum Corps member. He soon began competing individually through the Corps, winning honors at the Connecticut, Massachusetts, Hudson Valley, and Northeastern States Championships. At age 9, Brendan became the youngest drummer to hold The Dan English Trophy as the Connecticut State Junior Snare Drum Champion, a distinction he has won more times than any other individual.

In addition to teaching, Brendan is an active member of the Connecticut Patriots Drum Corps. He has also performed with the Grand Republic Fife and Drum Corps, the Middlesex County Volunteers, and The Top Secret Drum Corps of Basel, Switzerland. Through these groups, Brendan has toured both nationally and internationally, performing in Switzerland, France, Germany, and Australia. He has individually performed with notable musicians, such as Shania Twain, and was featured on an ESPN recording. Brendan is a proud member of The Company of Fifers and Drummers, USARD, and NARD. He is also an endorsee of Mapex/Majestic Percussion, The Cooperman Drum Company, Innovative Percussion, ProLogix Percussion, and Loyal Drums.